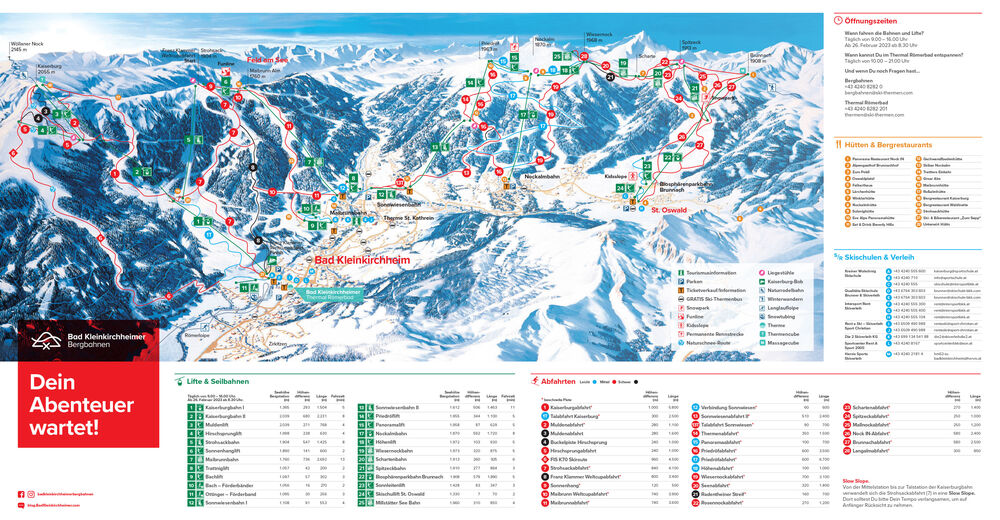 Wherever the World Cup ski circus makes a stop there is always a big scene: Franz Klammer, the fast living ski legend of the sport of skiing, is omnipresent in his home village of Bad Kleinkirchheim.

In Bad Kleinkirchheim, four ski schools offer professional advice in helping you to ski like Klammer. Ski kindergarten, child care and a well thought out course system, will turn the little fleas of the slopes into reckless snow bunnies pretty fast. Special packages have been developed to awaken the appetite of adult re-beginners helping to carve down the curves once again. Specifically trained skiing instructors and groups of like minded people make the inhibition threshold melt like snow in the spring sun. Of course suitable sports equipment will be provided as well. At all four entrances of the skiing area there are rental shops, where equipment can be exchanged at any time during your holiday.

But what would the snow in Bad Kleinkirchheim be without its pendant in liquid form? There is hardly another winter sports centre in the world that combines its realm of ski and snow with its spa temples in a more unique way than this well-being haven in the Carinthian Nock Mountains. The village’s own slogan says it all: "From the pistes into the spas”. If you want, you can take off your skis at the end of the final slope on the Franz-Klammer downhill run, and jump directly into the steaming pool of the Roemerbad (Roman Bath) thermal bathing centre.

Normally, however, water babes enjoy the relaxing effects of the thermal water after a sunny southern day of skiing the Carinthian way – this also includes the mild climate and the beneficial existence of a great number of traditional alpine huts and lodges. The water doesn’t just ease the pain in skier’s calves, but strengthens the heart and the cardiovascular system, also the immune system, while strengthening vessels and connective tissue, As well as reliving rheumatic pain and neuritis, also encouraging healing effect after operations and infectious illnesses. Two thermal spas, 21 hotel indoor swimming pools and 50 saunas are the basis of this traditional bathing culture, attracting guests from all over the world, long before the meaning of the word wellness was known.

This programme of enjoyment is rounded off by a hotel industry blessed with a great number of stars, comprising of two 5 star and more than 15 four star hotels, as well as a wide range of holiday apartments and comfortable bed & breakfast guesthouses. Here après-ski starts on the piste, as the combination of Carinthian hospitality, earthy alpine romanticism and sunny terraces encourage you to make one or more stops, for a drink or a bite to eat during the day. In the evening, pubs and restaurants – traditional, satisfying or crowned with stars – attract guests. Live music, discos and bars help even the most tired guests to wake up and enjoy themselves until the early hours.