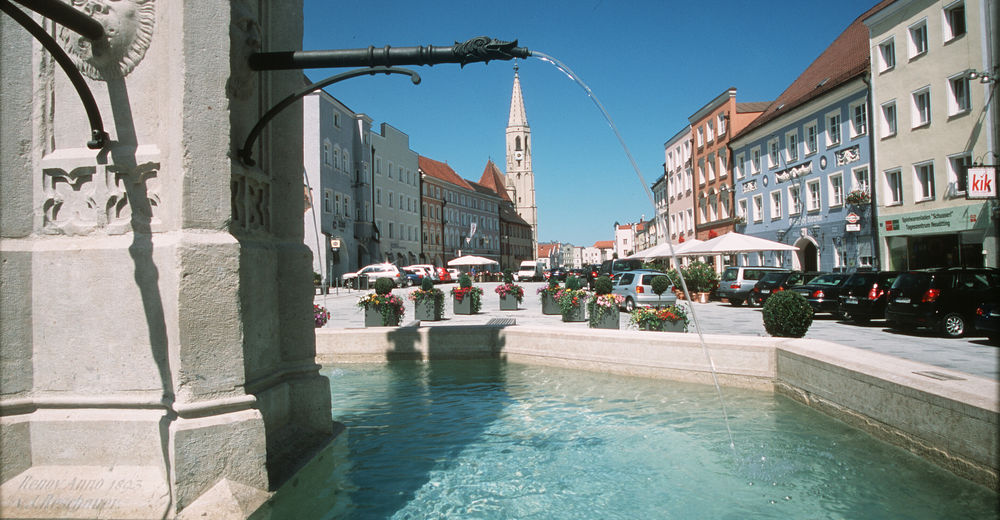 For the first time, "Oetting" has been mentioned in a document dated back to 748. During the 9th century, Oetting already was a royal province. After Hungarians had raided the lands in 907, the place was destroyed. The rebuilding was the cause for the separate histories of Altötting, Germany’s most famous place of pilgrimage, and Neuötting, a thriving trading city. The town surrounding the Gnadenkapelle (mercy chapel) was rebuilt and called Alt-Oetting. At the same time, a new place was constructed on a mountain plateau high above the river valley: Neu-Oetting. Neuötting’s municipal coat of arms with the Madonna who resides inside the octagon of the Oettinger Kapelle, shows the former unity of Alt- and Neuötting.

Neuötting can be divided into different boroughs: the medieval center of the town, Sebastiansvorstadt, St.-Anna-Vorstadt, and Fischervorstadt. The settlements between the historic town center and Inn and am Bürgerwald have been growing together during the last 25 years. Approximately 15 years ago, two industrial areas, one in the East (Inn-Center), and one in the West (Am Hergraben) have been added. In 1971, Alzgern has been made part of Neuötting. Alzgern lies east of Neuötting between Inn and Alz. The area around Alzgern has already been settled by Celts (500 BC) and Bavarians (700 AD). The place has first been mentioned in a document in 1268. St. Johann, Mittling, Untereschelbach, and Mitterhausen belong to Alzgern. Those villages still have churches of Romanesque origins.

Neuötting is a thriving trading city with various industrial areas, quiet living areas, and many possibilities to spend one’s leisure time with sports or culture. Excursions to nearby recreation areas and trips to Munich (95 km), Salzburg (70 km), Passau (86 km), or the Bäderdreieck Griesbach/Füssing/Birnback (50 km) are possibilities to spend a few days.